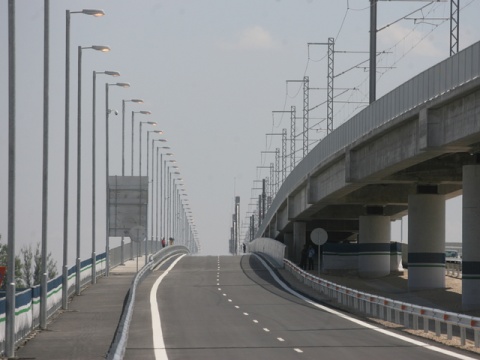 Repair works on New Europe, the second bridge on the Danube between Bulgaria and Romania have started on Monday, November 04, two-way traffic will pass through one lane.

One of the two lanes of the new Danube Bridge 2, named New Europe has been closed down on Monday for repair works, two-way traffic will pass through the lane Bulgaria – Romania, which remains open.

A large pothole gapped in the middle of the bridge, which was paved only 4 months ago, in the traffic lane from Romania to Bulgaria, will be repaired.

Other defects in the pavement, such as cracks due to poor drainage of the bridge, causing water to leak under the asphalt that were identified during a check commissioned by Bulgaria’s Ministry of Transport in October, will be removed.

The bridge was paved in April and launched in mid-June 2013.

Danube Bridge 2 linking Vidin in Bulgaria and Calafat in Romania, is part of the Pan-European transport corridor IV.