'Wake up!' In Bulgaria, Students Take the Streets to “Change Their Future” 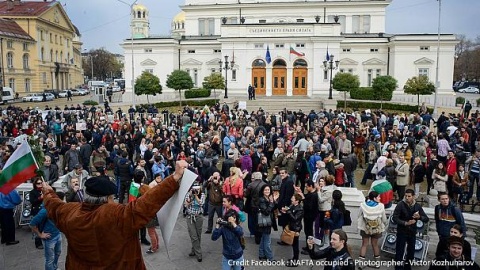 “Wake up!” chanted some 2,000 protesters rallying in front of Sofia University after students, who have been occupying part of the university since October 25, called for faculty and anti-government protesters to join their demonstration.

Protesters marched in the streets of Sofia to the beat of drums, chanting “Resign!” and “Red trash!”, blocking the traffic in downtown Sofia, AFP reports.

The students’ recent actions have had rejuvenating effects on the anti-government movement, fledging after 141 days. Bo?tcho Pentchev, a literature professor, told AFP he hopes that “the student movement will give a new momentum to the protests happening since June.”

Near the end of the demonstration, some protesters tried to cordon the Parliament building with a human chain in an attempt to block MPs inside, local media reports. Riot police intervened, leading to clashes between anti-government protesters and police force.

The Bulgarian Prime Minister Oresharski, main target of the protests since June, remained unfazed. He criticized the students’ actions: “I expected a different kind of protest demands from the students – a professional one, about education, because education is not in excellent shape, while their demands are typical political ones”,

November 1 is a highly symbolic day for students and professors to lead an anti-government rally. On that day, Bulgaria celebrates its “national enlighteners” – a collective term for all the revolutionaries, clergy and educators that played a key role in the Bulgarian Revival period and the independence fight against the Ottoman Empire.

Sofia University has been occupied since October 25, and classes cancelled since last Monday, with several other universities and colleges joining the movement. Among them, the Bulgarian National Academy For Theatre and Film Arts, the New Bulgarian University, the University of National and World Economy, the Medical School and Plovdiv University, about 120km away from the capital.

On social media, the hashtags #Occupy272, in reference to the lecture hall that was first occupied, and #OccupySU have joined the traditional #ДАНСwithme hashtag used by protesters  for more than 4 months.

Stanislav Kaschiyski, one of the students that occupy Sofia University, told euronews by e-mail that for him and his fellow occupiers, a typical day starts early. “We get up early, some of the students leave the building early in the morning, so the others have to keep control of the entrances and react to the media, which is very active from 7am to 9am because of the morning shows, ” explains this last year journalism student . He would know. At 22, Stanislav works as an editor for the Saturday morning show on the national TV. “When that ends, we have to control the arrival of the administration staff (we allow them to come into the building) and of other students, that have chosen to sleep at home (some of us really need to do that occasionally),” he explains.

The rest of the day is equally busy, according to Stanislav: “By 6pm a group of us goes outside the university and joins the ongoing #DANSwithMe protests. By 9pm – 10pm, we gather at the largest hall at the university 272 (the one we occupied at first) and discuss and vote for different things.”
Students have hopes that go beyond “the mass resignation of the current government” explains Nikolay Dyulgerov, an occupier of Sofia University and one of the student in charge of the leading Facebook page of the movement, with 20,000 likes and counting.

A veteran of the anti-government protests since June, Nikolay hopes for a “long-term awakening of the Bulgarian society and mainly – student society.” What he means it that, from “now on the society will be more active in withstanding its position regarding the decisions of the government and showing its discontent, instead of being resigned to the situation. Basically, I hope this movement manages to kill a lot of the apathy that’s surrounding us” he told euronews by e-mail.

Fighting the apathy is a common theme among the students. Stanislav, the journalism student, explains that, from what he saw, “students there want to stay in Bulgaria. But to be here and keep your, let’s say pride, is hard, so we are out to change our future. We are out to do something so we don’t have to run away from our country, as our friends did”.

Also involved in the protests since this summer, Stanislav thinks the movement can topple the government. “What our occupation has done is to show the people outside, who have lost hope, that things can change, that there is future and we should not fail.”

But he also hopes that “we’ll build the foundations of a democratic society which has faith in itself. If we fail I think we will have to wait another 15 years for new people to come that haven’t been hammered with pessimism,” he concludes.

The main target of the students, Bulgarian Prime Minister Oresharski criticized the students’ actions: “I expected a different kind of protest demands from the students – a professional one, about education, because education is not in excellent shape, while their demands are typical political ones”, the PM told the media while on a visit in the town of Kotel.

“There are many issues that have to solved within the next few years and we are aware of the fact that one year is not enough in order for them to be solved”, he said before adding a jab to the student movement: “I agreed to participate in a debate with the students, but don’t know what exactly happened so that the debate didn’t took place.”

The protests were originally sparked by the controversial appointment of businessman and MP Delyan Peevski as the new head of the State Agency for National Security in June this year. Public anger eventually led to his removal but the demonstrations have continued, albeit less intensely, and are now calling for the Socialist-led government to resign.