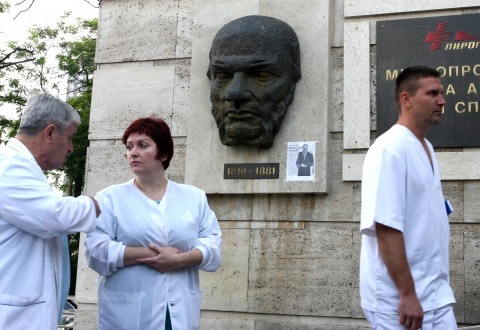 The rally was triggered by the decision of the National Health Insurance Fund, NZOK, to pay only 80% of activities of medical institutions by the end of the year.

The idea for the protest has occurred spontaneously in the morning and was supported by the entire staff. Not everyone attended the rally as this would mean completely shutting the hospital, the demonstrators are quoted in saying.

On Wednesday, NZOK has transferred to "Pirogov" 80% of the money due for September, said Associated Professor Stoyan Milanov, Head of the hospital.

According to him, the amount will merely cover employees' salaries.

"I hope this protest will not affect the patients and our work. This is a cry for help, a shout of indignation. We cannot go on the same way any longer. This must end. We certainly want to work in a normal way. Without security, we cannot continue. This is one of the strategic hospitals, does anyone think about this," said Milanov.