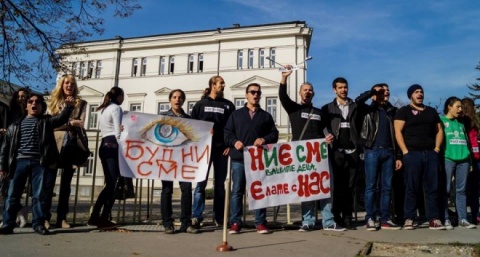 Protesting Bulgarian college students are demanding the resignation of the socialist-led government and the dissolution of Parliament. Photo BGNES

Protesting Bulgarian college teachers and students are organizing a mass march under the slogan " Wake up " on Friday, November 1, when the country marks National Enlighteners Day.

The procession is scheduled for 11:00 am and will depart from the steps of the main entrance of the building of the University of Sofia.

After the march, the teachers and the students will go back to the building for a joint meeting, which will start as 1 pm.

Protesting students will also read poetry in memory of Bulgarians who have become a symbol of education, science and culture. The reading will take place in the park adjacent to the National Library and the University.

Bulgaria has been celebrating the National Enlighteners Day as a national holiday since 1922 and teachers and students have seen parades on this occasion since the 1930s.

The holiday was suspended by the Bulgarian Communist regime in 1945. After the dissolution of the Soviet Union, celebration was resumed in 1990 and made official again in 1995.

Protesting Bulgarian college students have staged partial or full blockades at a number of universities in Sofia and across the country, demanding the resignation of the socialist-led government and the dissolution of Parliament.

The initiative was launched by the Sofia University "St. Kliment Ohridski", which has had its central building blocked since last Friday. No classes are taking place at the central building on Tsar Osvoboditel Blvd and the governing body of the University is in talks with the protesting students to persuade them to lift the blockade.