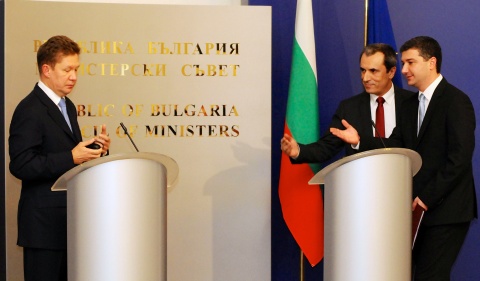 Miller arrived in Bulgarian capital Sofia on Thursday, but the government did not release preliminary information about the purpose of the visit.

The two spoke at a joint briefing after the meeting Thursday afternoon.

"Today we start the construction of the Bulgarian section of the pipeline South Stream - this is a glorious event," said Miller

He stressed South Stream was the most important part of energy security of Europe as supplies will go directly to Bulgaria, respectively to the European Union. The direct delivery would also reduce the price of gas for Bulgaria, according to him.

Miller confirmed that the first delivery of natural gas in Bulgaria via South Stream will happen in December 2015.

"Today we can give the symbolic start of a very important for Russia, Bulgaria and Europe project - South Stream. This is the largest project undertaken in our territory. The Bulgarian government will assist in the realization of this project," said Oresharski.

He explained the basic parameters of the project were further defined at the meeting.

"The Bulgarian side will not invest even a penny and the parameters are set so that they are profitable for Bulgaria," added the PM.

Opponents of the project, however, insist it is not true the pipeline will be of no cost to Bulgaria because under the clauses of the contract, the country will not receive any money from transit fees for 15 years and all revenues generated by the gas pipeline during the period would go to Gazprom.