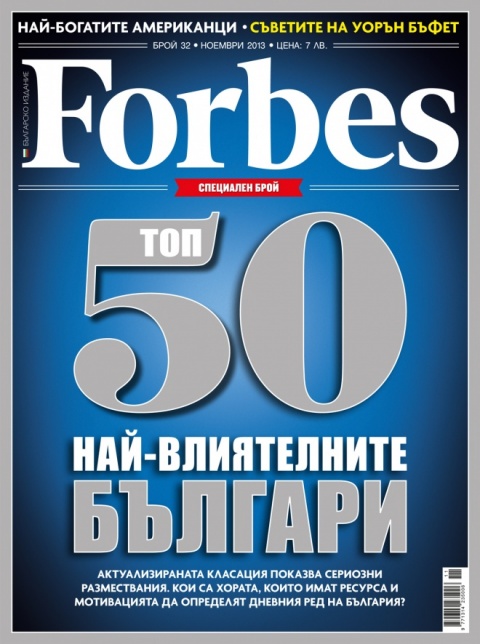 The Bulgarian edition of Forbes Magazine has published its ranking of the top 50 most influential persons in the country. Photo by Forbes Bulgaria

The Bulgarian edition of Forbes Magazine has unveiled its ranking of the top 50 most influential persons in the country, the list being topped by banker Tsvetan Vassilev.

Forbes Bulgaria has stated that its criteria for the top 50 most influential Bulgarians are the same as those for its world top 30: number of people over which the person in question has power, the amount and kind of resources at his or her disposal, and the degree of active change he or she effects on the country.

Among the 50 persons singled out by Forbes to be most influential for Bulgaria at the present moment are 28 politicians, 20 business people and 2 NGO representatives.

“This is not a ranking of good or bad heroes. It is based on a clear methodology and measures the influence people wield, regardless of whether this changes the country for better or for worse,” Yordan Mateev, Editor-in-Chief of Forbes Bulgaria, commented.

Predictably, the list was topped by Bulgaria's ubiquitous and manly former prime minister Boyko Borisov, the then leader of the former ruling center-right GERB party.

Interestingly, the top 10 featured four officials from GERB party, which was ruling at the time.