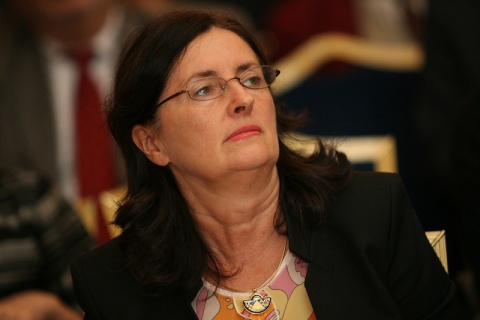 Speaking Tuesday at the opening of a forum on investments, she said that the law would be amended so as to remove incentives which Bulgaria could not afford to offer.

Bobeva made clear that the list of proposed changes included the abolition of the provision envisaging state aid amounting to 10% of the investment.

"We cannot afford this. We have never been able to afford this, even at times when the budget was in a much prettier state," she stated.

"The development of the Bulgarian economy this year could have been worse, taking into account that it survived three governments, an unfavorable external climate, and a number of inherited problems. Despite that, out economy is getting by," Bobeva announced, according to reports of the BGNES news agency.

Reminding of the steps the government had taken to cut red tape, she specified that the first package of 24 measures had already been included in bills which were to be approved by the government next Wednesday and were expected to enter Parliament after that.

Bobeva said that the second anti-red tape package consisted of 88 measures, adding that the ministries were to prepare the bills in two months and the package was to reach Parliament by end-2013.

She explained that the third package aimed at reducing the administrative burden was being developed by four ministries and included 100 regimes which involved particularly sensitive issues for businesses.

Bulgaria's Deputy Prime Minister did not specify priority sectors for the government but noted that the tourism strategy had been prepared and a discussion with branch organizations was to start by the end of the week.

She emphasized that the poor image of the domestic business sector was a serious problem for Bulgaria's trade and economic representatives abroad.

"Trade representatives are anxious about helping companies interested in exporting or doing business abroad because they may be accused of working for oligarchs. Image problems plague a number of sectors of Bulgarian business. This is no way to encourage investments," Bobeva stated.

She explained that the government planned radical changes aimed at improving revenue collection.

Bobeva admitted that a problem with the issuance of cash receipts had been registered for the past few months and vowed measures to tighten control.

She also said that the government was reconsidering the idea to privatize the Bulgarian Stock Exchange (BSE).

Bulgaria's Deputy Prime Minister said that the government would keep the list of criteria for potential buyers of the BSE which had been compiled by the previous government.