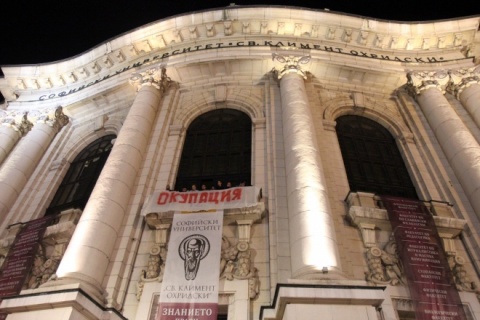 The main building of the St. Kliment Orhidski Sofia University with an 'Occupation' sign hanging since Friday night. Photo by OffNews.bg

Bulgarian college students from the National Academy for Theatre and Film Arts (NAFTA) in Sofia have occupied its campus.

The announcement was made Monday through the Facebook page of the student movement "Early Bird."

Early in the morning, NAFTA students sent out a statement to the media in support of their colleagues from Sofia University and then started the blockade.

On Sunday, the President of the Union of Artists in Bulgaria, Hristo Mutafchiev, expressed support for the protesting students and visited them in the company of popular young actor Ivaylo Zachariev. There, he told reporters that he wanted to inform that all of his colleagues will support the student protesters.

Meanwhile, the student occupation has reached the university in the central Bulgarian city and old Bulgarian capital Veliko Tarnovo. At 9:15 am Monday, students have occupied lecture hall 321 there.

"The management does not support us. We expect your presence," the Veliko Tarnovo students have written.

Students occupied the largest lecture hall, 272, at the Law Faculty of Sofia University last Wednesday and were joined Thursday by students from the Faculty of Mathematics and Informatics, and the Journalism Faculty.

Other colleges in Sofia are expected to join the protests. Bulgarian students studying abroad have also expressed their support to their colleagues.

The Hall 272 occupation was symbolic, as it was staged at a time when Constitutional Court chair, Dimitar Tokushev, who also teaches at the university, was about to give a regular lecture.

Students demanded explanation from Tokushev regarding the Court's decision to confirm the status of controversial media mogul Delyan Peevski as MP.

June 14 Peevski was elected and swore in as chair of Bulgaria's State Agency for National Security, a highly controversial move that sent off thousands in the streets, in protests which have continued since.

As a result of the public pressure, Peevski resigned on the next day, leaving his status as MP unclear.

October 8 the Constitutional Court formally decided that Peevski has retained his status as MP and can return to Bulgaria's Parliament.

More than 200 students spent the night in the Sofia University main building, and the occupation of Bulgaria's largest and most prestigious school, Sofia University "St Kliment Ohridski" is in place Monday and all classes are cancelled.

The management of the University is convening a special meeting of the Academic Council at 2:00 pm to discuss the situation.

The Council announced earlier that classes will be cancelled in order to avoid administrative chaos.

Sunday evening, thousands responded to the call for support of students, who have occupied Sofia University.

The "Occupiers" sought help through their Facebook page after a group of young skinheads, led by the Socialist party lawmaker, Boris Tsvetkov, tried to invade the school's main building in downtown Sofia.

The Academic Council issued an appeal for understanding and patience to all students, faculty and staff, regardless of whether they support the protest or not.