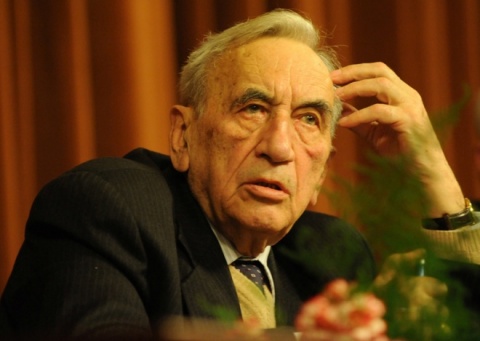 The first Prime Minister of Poland after the fall of communism, Tadeusz Mazowiecki, has passed away in Warsaw at the age of 86. Photo www.uw.edu.pl

Mazowiecki became Polish Prime Minister after the June 4, 1989, elections. They were won by the opposition gathered around the Solidarity trade union, which launched the economic and political changes in the country after the end of the communist regime.

The BBC reminds Monday that Mazowiecki was one of the architects of the "Round Table" talks, between communist leaders and opposition, paving the way for elections in 1989, while the Solidarity's victory set a precedent for the toppling of communist governments across Eastern Europe.

Mazowiecki remained in office until 1990, and was a strong advocate of Poland joining the European Union.

In the mid-90s, at the height of the Balkan wars, he was the rapporteur for former Yugoslavia.

Polish Foreign Minister Radoslaw Sikorski has paid tribute to the former PM, describing him as "one of the fathers of Polish liberty and independence".

The BBC published the following biography of the prominent politician:

Mazowiecki was from a Polish noble family and studied law at Warsaw University.

He was expelled from the communist-run Catholic PAX organization in 1955, under suspicion of belonging to an internal opposition group.

In 1957, he helped found the Catholic Intelligentsia Club.

In 1981, he became the first editor of opposition Tygodnik Solidarnosc (Solidarity Weekly) magazine, which was banned when the communists declared martial law in December 1981.

Mr Mazowiecki was arrested during the crackdown and was one of the last prisoners to be released in December 1982.

A former adviser to Lech Walesa and the striking shipyard workers in Gdansk in 1980, Mr Mazowiecki was a firm believer in a negotiated transition from the communist system.

He took part in the Round Table Talks in February 1989, which led to the first partially free elections in the Soviet bloc in June of that year.

He was appointed prime minister in August 1989 and oversaw the political and economic transition to a democratic and free market country.