Number of Refugees in Bulgaria Swells to 8 000 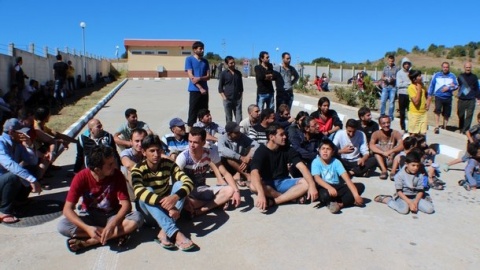 Bulgaria is the gateway to the European Union for refugees fleeing Syria via Turkey, many crossing the border illegally to seek asylum. Photo BGNES

The number of refugees in Bulgaria is already close 8 000, it became clear at the Wednesday meeting of the parliamentary committee on home affairs.

The exact number of refugees in Bulgaria is currently 7 365, but around 500 people, who are currently in custody, should be added, according to Deputy Interior Minister Vassil Marinov.

He told the lawmakers that these were people who have crossed the State border illegally. Their identity is yet to be established and their fingerprints taken.

Marinov informed that from the 12 people, awaiting deportation for being a threat to national security, only one has been involved in actual military fighting, but declined revealing his country of origin.

According to the Deputy Interior Minister, another two hundred Algerian citizens, currently in Bulgaria, must be deported as well. However, the deportation cannot be done directly on a flight to Algeria as the Algerian State has a practice not to accept charter flights.

The Bulgarian authorities are seeking options to send the Algerian nationals back to their homeland through another country and on other flights.

Nine people have been arrested Wednesday at the Bulgarian-Serbian border for attempting to leave Bulgaria and reach Western Europe.

The country has asked and was promised EU aid in order to deal with the ongoing refugee influx.