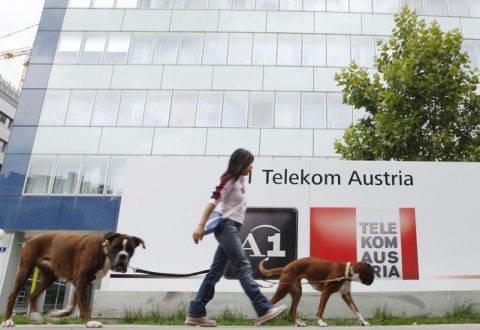 A pedestrian takes dogs for a walk past the Telekom Austria AG headquarters in Vienna, Austria. Photo by Bloomberg

Moody's has downgraded Telekom Austria's ratings to Baa2 after its recent debt-financed acquisition of mobile spectrum in an auction in Austria.

The rating agency considers that the EUR 1 B acquisition will have a material negative effect on the company's financial ratios.

"We are downgrading Telekom Austria's ratings mainly because its recent debt-financed acquisition of mobile spectrum will have a negative impact on the group's credit metrics," says Carlos Winzer, a Moody's Senior Vice President and lead analyst for Telekom Austria.

"Although Telekom Austria's mobile business will benefit from the additional spectrum, the debt-financed nature of the acquisition increases the group's financial risk beyond the level of tolerance for the previous rating."

The outlook on the ratings is stable.

Telekom Austria shook up last month the senior management of its Bulgarian subsidiary, saying the country is the most difficult market within the group.

Telekom Austria named Thanasis Katsiroubas on September 16 as chief executive of its Mobiltel business in Bulgaria, where the market is locked in fierce competition.

Katsiroubas moves from being CEO of Vip mobile in Serbia to replace Andreas Maierhofer, who did not renew his contract after 10 years working for the group abroad, the company said. Mobiltel marketing head Martin Lippautz was also leaving.

Katsiroubas, 51, has more than two decades of experience in the sector, and has also served as CEO of Mobiltel rival Globul.