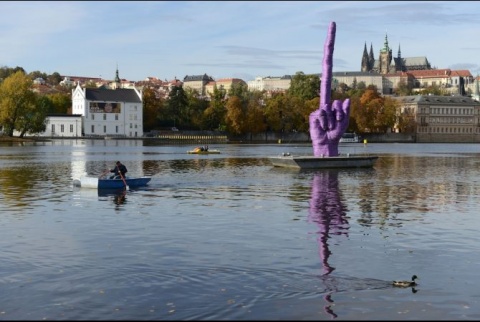 David Cerny, "l'enfant terrible" of Czech art, has created and mounted yet another bold street installation in the very heart of Prague.

The famous and controversial artist, known for his strong anti-communist stance, floated a huge purple statue of an extended middle finger down the River Vltava.

The installation comes in the eve of Friday's general elections in the country, where polls forecast that the Communists might enter its rule "through the back door" for the first time ever since the fall of the Berlin Wall in 1989.

The giant purple hand has been mounted on a barge floating on the river and is pointed at Prague Castle, the seat of President Milos Zeman.

Zeman supports a post-election plan to have the left-wing Social Democrats form a minority government, which is said to enjoy the tacit support of the Czech communists. If this happens, the communists, albeit indirectly, will find themselves back in power for the first time since the Velvet Revolution.

Cerny is known for always defying authority and officials through his art and views. His latest piece is seen as a clear message to the leftist President and the political party recently set up by his supporters.

It is unknown if the finger is to stay floating on Vlatava or be removed. Zeman was on an official trip to the Ukraine Monday, when the installation was mounted.

The Czech parliament was dissolved in August following weeks of turmoil in Czech politics.

Prime Minister Petr Necas's government collapsed in June amid a bribery scandal, and a government of technocrats, formed by President Zeman in July and opposed by the main political parties, resigned in August.

In January 2009, his satire of European stereotypes in an eight-ton mosaic of the bloc's then-27 nations, called "Entropa," caused quite of a scandal, particularly in Bulgaria.

The piece, which was installed at the European Council building in Brussels, was supposed to proudly display unique traits of each country in the union. Instead, it depicted Bulgaria as a Turkish squat toilet, Catholic Poland as a group of priests raising a gay flag and Germany as a network of motorways eerily resembling a swastika.

Only Bulgaria, however, censored the installation, as it protested against the way it has been presented, which resulted in the toilet being draped in a black veil, making it even more visible.

As recently as August 21, the controversial monument of the Soviet Army in the downtown of the Bulgarian capital Sofia was colored in honor of the Prague Spring.

The unnamed street artists sprayed the monument with pink color in an artistic apology to the Czech for the Warsaw Pact invasion and in a tribute to Cerny, who in 1991 painted pink a Soviet tank in Prague, mounting an erected middle finger on top.