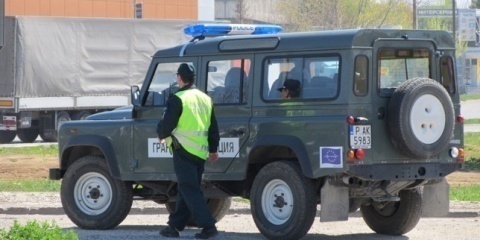 Bulgarian border police are on high alert over the refugee influx from Syria. File photo by BGNES

A total of 398 asylum-seekers have entered Bulgaria once again through its border with Turkey over the past 24 hours, according to the Bulgarian Interior Ministry.

The Bulgarian border police reports that 245 of the asylum-seekers were Syrian nationals.

The total capacity of 4 090 in the shelters under the authority of the Interior Ministry and the State Agency for Refugees has been exceeded by 327 beds. The Agency is working on easing the red tape and shortening the procedure to grant asylum status of foreigners in Bulgaria.

The Bulgarian State is about to undertake very serious measures in the direction of a clampdown at the southern border, stated the Minister of Defense Angel Naydenov, after Monday's extraordinary meeting of the Council of Ministers to debate the issue of the refugee wave in the country, caused by the Syrian conflict.

The measures include sending back refugees trying to enter the Bulgarian territory from Turkey or, at least, redirecting them to regular border crossing checkpoints.

Security at the border has been upped by border police from other parts of the country. Additional staff to process documents has been sent as well. The country is also considering building a wire fence on the Turkish border.

The country has asked and will receive EU aid in order to deal with the ongoing refugee influx.