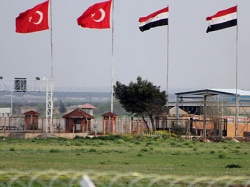 Turkish Interior Minister Muammer Guler has denied statements that his country is constructing a wall along its border with Syria.

According to the Anadolu news agency, Guler has clarified that fences are being constructed on the Turkish- Syrian border to prevent Turkish citizens from entering mined areas.

It was earlier reported that Turkey had started the construction of a wall along the border with Syria to prevent the entry of illegal immigrants.

Turkey is sheltering approximately 500 000 people who have fled the Syrian conflict. The country is one of Syrian President Bashar Assad's fiercest critics and a staunch supporter of the rebels fighting against him.