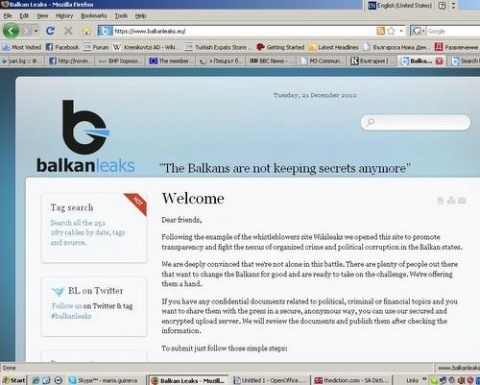 According to US journalist Andy Greenberg and the Italian Panorama magazine, Balkanleaks are WikiLeaks' most successful copycat. File photo

The most successful case of journalists integrating the WikiLeaks system is that of the Bulgarian site Bivol, according to the Italian weekly Panorama latest's edition.

The information was reported by Darik Radio.

Bivol is praised in an article dedicated to the launch of the online project SecureDrop, which is expected to make the work of investigative journalists easier, by improving the system initiated by the whistle-blowing site WikiLeaks.

SecureDrop is a computer program, whose code was first developed by late internet activist Aaron Swartz, who recently committed suicide, and later expanded into a platform by journalist Kevin Poulsen from the American magazine Wired. This stage of the project is financed by the Freedom of the Press Foundation.

The new online platform uses the Tor browser, a project developed initially by the US State Department, which allows anonymous uploading of documents on hidden servers.

The platform will allow investigative journalists to receive anonymous access to secret documents and communicate securely with their sources without ever learning their ID.

This will provide better protection not only for sources, but for the journalists - from pressure to disclose these sources and from potential prosecution.

The idea to integrate WikiLeaks in the work of a particular media is not brand new, Panorama reminds, writing that the first ones to experiment with it have been The Wall Street Journal and Al Jazeera TV, but they have been criticized for technical flaws and legal vulnerability.

Panorama notes that Bivol has been the most successful in integrating WikiLeaks and that published information, sent over its BalkanLeaks site, modeled after WikiLeaks, has contributed to the resignation of Bulgarian Prime Minister Boyko Borisov on February 20, 2013.

In 2012, in his book This Machine Kills Secrets: How WikiLeakers, Cypherpunks, and Hacktivists Aim To Free the World's Information, American journalists and Forbes technology reporter, Andy Greenberg, called BalkanLeaks "WikiLeaks most successful copycat."

Excerpts from the book read HERE and HERE.