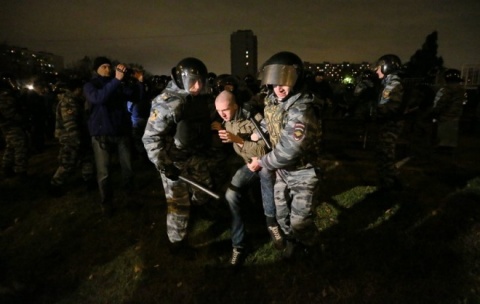 Police in Russian capital have revealed the identity of the suspected perpetrator of a murder that sparked massive unrest in a southern district on Sunday.

The suspect, which has been filmed on CCTV, is a national of Azerbaijan, and according to police information, is already investigated for another murder in his country.

The Thursday stabbing of a 25-year-old ethnic Russian in the district of Biryulyovo provoked massive public outrage, which however took on xenophobic overtones, as some ralliers chanted racist slogans directed against migrants from the Caucasus and Central Asia.

Meanwhile, Muslims in Russia and around the world are celebrating the major Islamic holiday of Eid al-Adha (Kurban Bayram).

Some 103,000 Muslims are estimated to have attended mass street prayers outside a mosque in Moscow on Tuesday to celebrate the feast, reports the BBC.

The congregations were heavily guarded by police, for fear of hostilities breaking out.

More than 400 people were detained in the wake of riots in Biryulyovo Sunday, with three of them facing criminal charges, and some 70 others getting misdemeanor fines.

Russian Minister of Interior Vladimir Kolokoltsev and Moscow police chief Anatoliy Yakunin have both blamed the riots on people they called "extremists."

At the same time, local Moscow authorities, as well as MPs in the Duma vowed to impose stricter control over people illegally arriving in Russia and residing in major cities.

Some 1600 migrants have been detained in Moscow during inspections within the last two days.