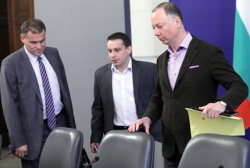 The Sofia City Prosecutor's Office, SGP, has charged the Council of Ministries Head Secretary, Rosen Zhelyazkov with abuse of office.

The charges stem from the notorious case in illegal ballots discovered at a printing house in Kostinbrod, near Sofia, hours ahead of the May 12 early general elections.

According to the prosecution, Zhelyazkov failed to exercise proper control over the printing house "Multiprint" in order to provide benefits for its owner. 480 000 ballots above the contracted ones were found in the printing house in the wake of the elections.

SGP remind that the contract included a clause with requirements to exercise strict control on the printing process.

Zhelyazkov is on own recognizance.

Over 30 people from the administration of the Council of Ministers and the printing house have already testified.

Late on May 10, a team of prosecutors and officers of Bulgaria's State Agency for National Security (DANS) stormed into a printing facility in the western town of Kostinbrod and seized a large load of ballots.

It was reported that the Multiprint company had been awarded a public procurement contract worth around BGN 800 000 to print and deliver 7.8 million ballots for the May 12 early elections.

The firm had been under an obligation to print and deliver the ballots to the district administrations by May 8.

The printing house is owned by a municipal councilor in Kostinbrod from the formerly-ruling center-right Citizens for European Development of Bulgaria party, GERB, which prompted opposition parties to accuse GERB of an attempted voting fraud.

The owner claimed that the extra ballots had been technical spoilage.

Soon after, Zhelyazkov commented that every printing house could use its matrixes for whatever it wished and print ballots as wallpaper if they wanted to. He dismissed the ensuing outrage with the explanation he was just joking.

Bulgarians went to the polls on May 12 to elect a new Parliament after the GERB government led by Borisov resigned on February 20 amid nationwide anti-poverty and corruption protests.

The election campaign was accompanied by another serious scandal involving alleged unauthorized use of special surveillance devices during Tsvetan Tsvetanov's term in office as Interior Minister.