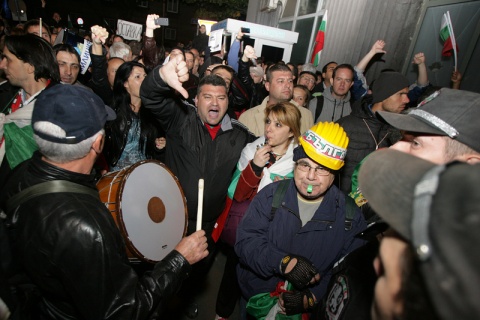 Protests against the Govt have been going on for over 3 months in Bulgaria. Photo by BGNES

Up to 15 000 people may go on strikes and protests as a result of the Bulgarian government’s plans to lay off 40 000 state servants, says the head of the trade unions.

Plamen Dimitrov, Chair of the Confederation of Independent Syndicates in Bulgaria (KNSB), warns that the layoffs are likely to cause disturbance in many key sectors, and between 11-15 thousand workers may be expected to go on strikes and protests.

“The government is simply trying to fill gaps in the 2014 budget with these layoffs. It’s not a good idea. I can already see tensions in sectors like mining, energy, and railways, where long-term strategies have been absent”, said Dimitrov for NovaTV.

Prime Minister Plamen Oresharski and the Finance Ministry confirmed plans of cutting administration by up to 10% starting January 2014.

The KNSB Chair added that the layoffs must be planned very carefully and not selected on a random basis.

“Revenue sectors, supervisory authorities, labor and food inspectorates, and other agencies working directly with the people must not be cut, but even increased. As for ministries, there is an overabundance of personnel”, said Dimitrov.

On Sunday, union leaders informed that employees of the National Health Insurance Fund, NZOK, are already planning a strike.