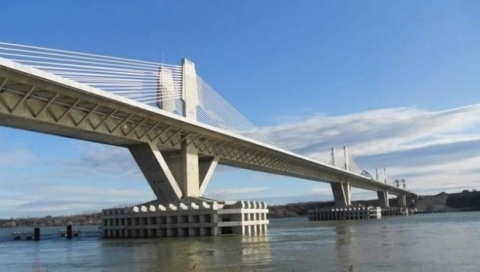 The second bridge on the Danube between Bulgaria and Romania is named New Europe. Photo by BGNES

A large pothole is gapping on the brand new Danube Bridge 2 in the traffic lane from Romania to Bulgaria.

The information was reported by the Bulgarian 24 Chassa daily (24 Hours).

The bridge was paved in April and launched in mid-June 2013.

The hole is temporarily fixed by being filled with cement instead of asphalt.

The problem is larger than the hole, according to the report, because after the downpours from last week, water has leaked in the concrete corridor underneath where there are communication cables.

Employees of the Road Infrastructure Agency have examined the damages on Friday. Another extensive check of the facility is expected and it will include experts from the Central Institute for Road Technologies, National and European Norms and Standards.

They must assess the condition of the bridge and find out what caused the damage just months after it was hydro-isolated and paved.

In April 2013, before the second bridge was launched, a large pothole on Danube Bridge 1 clogged traffic between Bulgaria and Romania.