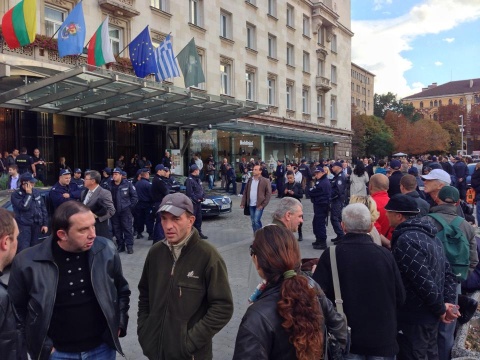 Two police cordons awaited Thursday Bulgarian Prime Minister Plamen Oresharski at the entrance of hotel "Sheraton" in Sofia to protect him from a disgruntled crowd.

Antigovernment protesters waited for Oresharski to arrive at the hotel for his meeting with the Hellenic Business Council.

About 50 riot police officers were at the scene and thanks to them, the Prime Minister was able to enter the hotel through the back door, bTV reported.

Meanwhile, security guards from the National Security Services, NSO, promptly removed the sign "resignation" which was stuck on the wall of the hotel's conference room where the event, attended by Oresharski, is held.

The PM has been forced to use back entrances on numerous occasions already and all of his public appearances are now accompanied by protest rallies and blockades.

The latest such incident happened Tuesday evening, when his motorcade was blocked by protesters as he came out of the Sofia City Art Gallery where he attended the opening of an exhibition entitled "Jules Pascin – From Vidin to Paris."

Thursday is the 119th day of antigovernment protests in Bulgaria.

After dwindling in numbers, they strengthened Tuesday evening as earlier in the day Bulgaria's Constitutional Court officially decided to allow lawmaker and media tycoon Delyan Peevski to return to Parliament.

The appointment of Peevski, a lawmaker and shady media tycoon, as Chair of the State Agency for National Security (DANS) on June 14 triggered mass protests in Bulgaria, ongoing for nearly four months now.

The cancelled appointment brought up the question of whether Peevski could return to his previous post of MP from liberal party Movement for Rights and Freedoms.

Center-right party GERB initiated a lawsuit, insisting that Peevski could not retain the capacity of MP because he had been sworn in as DANS Chair.

However, DPS argued that Peevski had not assumed office and had not had the opportunity to start fulfilling his duties and was therefore still considered an MP of the party.