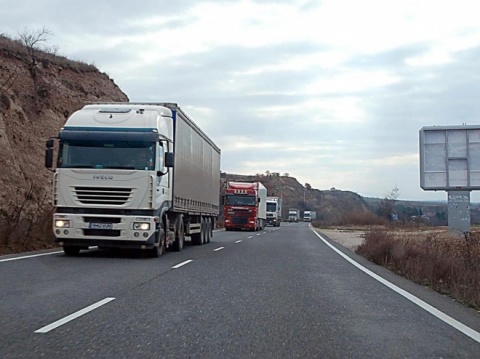 A Bulgarian truck driver has been thrashed on the Turkish border, says Petko Angelov, Deputy Chairman of the Bulgarian Association of Road Transport Unions, BASAT.

Since Tuesday, Turkish trucks have been blocking the Kapitan Andreevo checkpoint in sign of contempt over the mandatory checks that have been conducted by Bulgarian border authorities.

The blockade was lifter briefly on Wednesday to be staged again and lifted again Thursday afternoon.

Angelov confirmed the blockade is currently lifted, but explained the drivers might have been edgy and tense over the long wait and have attacked the first driver to cross the border from Bulgaria into Turkey.

According to unconfirmed reports, the driver works for the largest road carrier in Bulgaria, "Pimk."

"We still don't know all details, but we were informed about an incident with a Bulgarian driver on Turkish territory. We are investigating the case," said Angelov.

Turkey closed their side of the border on Tuesday as their Customs agents insisted for Bulgaria to lift checks on Turkish trucks crossing from Bulgaria into Turkey.

In response, Bulgaria asked Turkey to comply strictly with international agreements on road transport of goods.

The request came after a recent increase in the number of Bulgarian trucks detained at checkpoints on the Bulgarian-Turkish border by Turkish authorities.

A lack of "appropriate" permit, required for a given freight is the reason for the detentions according to Turkish customs authorities. Bulgarian carriers are required to pay a fee of EUR 3000 in order to be granted permission by Turkey's customs to enter the country.

Turkey introduced the new fees for carriers on September 1st.

Bulgaria's official position is that the introduction of the fees in September is a breach of a transport agreement between Bulgaria and Turkey and Bulgarian carriers should not be made to pay them at the border.

"This is insane – Bulgarian drivers to be fined on the Turkish side all while the Turkish ones protest against checks on the part of Bulgarian border authorities," Petko Angelov stated Wednesday.