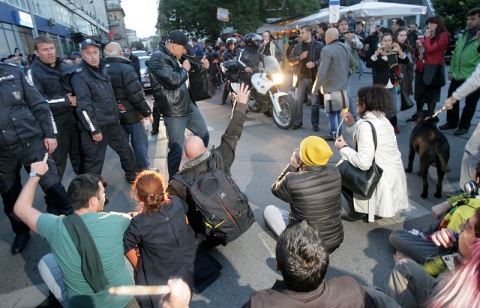 The anger of anti-government protesters, who have been calling for the resignation of the socialist-led cabinet of Prime Minister Plamen Oresharski for over 120 days, was rekindled by Tuesday's decision of the Constitutional Court (KS) to allow notorious media tycoon Delyan Peevski to retain the post of MP from the ethnic Turkish Movement for Rights and Freedoms (DPS) party.

Peevski's appointment as Chair of the State Agency for National Security (DANS) on June 14 unleashed a series of protests which were not appeased by the prompt cancellation of the Parliament's decision. Although the scandalous appointment was cancelled, the protesters demanded the resignation of the government over ties with oligarchs.

On Tuesday, the demonstrators blocked the motorcade as Oresharski was going out of the Sofia City Art Gallery where he attended the opening of an exhibition entitled "Jules Pascin – From Vidin to Paris."

The demonstrators stood in the way of Oresharski's vehicle on the crossing of the Gurko Str and Rakovski Str in downtown Sofia, chanting "Resign", "Thrash", and "Mafia."

Officers of the National Security Service and the Interior formed a police cordon to clear the way for Oresharski's vehicle.

Then the group of protesters moved to the Council of Ministers building, where Oresharski was rumored to have hidden.

The crowd of protesters keeps chanting "Resign", waving Bulgarian flags and beating drums in front of the government headquarters.