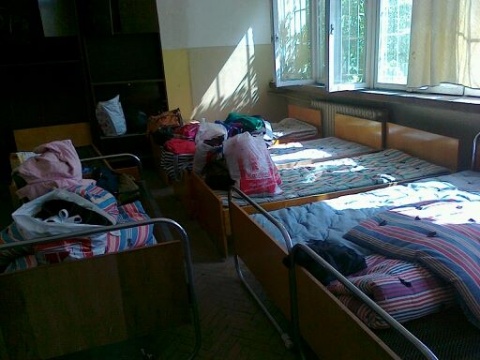 The refugee shelter in the Vrazhdebna suburb of the Bulgarian capital Sofia, photo Facebook

Refugees from the shelter in the Vrazhdebna suburb of the Bulgarian capital Sofia have complained from shortage of food and lack of hot water.

Speaking for Nova TV Saturday, they told about the deplorable conditions in the shelter where in addition to not having hot water, the bathrooms did not even have doors.

The refugees informed that there was no food in the shelter or a place to cook if they manage to buy groceries on their own.

They said they hoped to receive soon some medications for their children.

The Syrian conflict has caused a refugee wave in Bulgaria and the country has already exceeded its shelters' capacity.

At the end of September, Syrian refugees in the Vrazhdebna shelter complained from hostility of locals and the deplorable conditions there and some even refused to occupy to provided rooms, saying they worried about the health of their children.

On Friday, Bulgaria's European Commissioner on humanitarian aid and crisis response Kristalina Georgieva visited the shelter in Vrazhdebna and concluded that Bulgaria is in need of extra funds for dealing with the refugee crisis.