Monument of Biggest Donors in Bulgarian History Unveiled in Karlovo 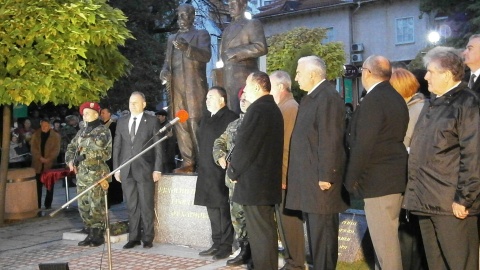 A new monument of the biggest donors in Bulgarian history, brothers Evlogiy and Hristo Georgievi, was unveiled in their native town of Karlovo. Photo presscenterkarlovo.bg

A monument of brothers Evlogiy and Hristo Georgievi was unveiled Thursday evening in their native town of Karlovo.

Georgievi are the biggest ever donors in the history of the country. Among other charities, the two wealthy brothers have made possible the opening of Bulgaria's oldest and most prestigious college – the University of Sofia.

The ceremony included a military roll call and a performance of an army brass band.

The initiative to erect a monument of the two prominent Karlovo men belongs to patriotic local residents, and funds were collected through a charitable campaign, organized by the Rotary Club in Karlovo.

The monument was unveiled by the Mayor of Karlovo, Dr. Emil Kabaivanov (former leader of the Bulgarian right-wing Union of Democratic Forces, UDF), and by the President of the Karlovo Rotary Club, Zdravko Kostadinov.

The keynote address, dedicated to the brothers who donated millions to their homeland and their native city, was delivered by Prof. Ivan Ilchev, President of the University of Sofia "St. Kliment Ohridski".

The ceremony for the opening of the monument concluded with laying of wreaths and fireworks.

The famous words of Evlogiy Georgiev: "Only my hope that I can and will participate in the prosperity and glory of my homeland makes me die in peace," are written on the base of the monument.

These words remain forever in the memory of his fellow citizens.