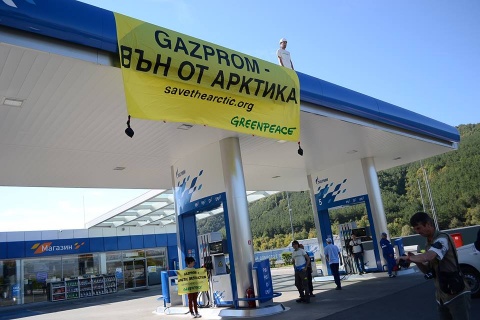 "Gazprom - out of the Arctic", the banner says. Photo by offnews.bg

Greenpeace activists have occupied a Gazprom gas station near Bulgaria’s southwestern town of Blagoevgrad, according to local media.

The group has demanded the liberation of the Greenpeace activists who were detained and face piracy charges after protesting at a Russian oil rig in the Arctic Ocean.

Greenpeace activists from six European countries – Austria, Bulgaria, Hungary, Romania, Slovakia and Slovenia – are said to have occupied the gas station near Blagoevgrad, with some of them having chained themselves to fuel pumps.

Their banners say “Gazprom – destruction of the Arctic” and “Free our activists.”
The gas station manager has called police.

Russian border guards seized the Greenpeace icebreaker Arctic Sunrise and its multinational crew in international waters last Thursday after Greenpeace activists scaled the side of the Prirazlomnaya oil rig in the Pechora Sea in a demonstration against Gazprom’s Arctic oil drilling.

The suspects face up to 15 years in prison under the piracy case opened by Russian investigators this week, which Greenpeace dismissed as absurd, saying that the protest was peaceful and that the border patrol had seized the Arctic Sunrise at gunpoint.