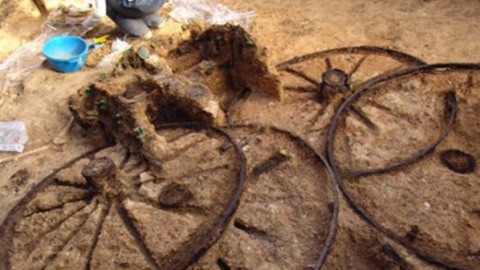 Archeologists have unearthed a 25-centuries-old two-wheel carriage near the Bulgarian northeastern town of Sveshtari.

The archeological expedition led by Professor Diana Gergova uncovered the Thracian carriage, relicts of its decorations and the carcasses of two horses in mound 28 A in the region of Sveshtari, reported Bulgarian Darik.

“The find is unique, it is not resembling any other carriage dating from the Thracian era ever uncovered in Bulgaria”, the archeologists explained.

The finding of an ancient carriage in the Sveshari region was unexpected success for Gergova’s team as treasure-seekers were known to invade in the region of Svestari seeking gold and excavators dug despite the UNESCO’s ban.

The hill where the carriage was discovered is adjacent to the famous Mound of the Bulgarian Khan Omurtag where Gergova’s research team found an ancient golden treasure last year.