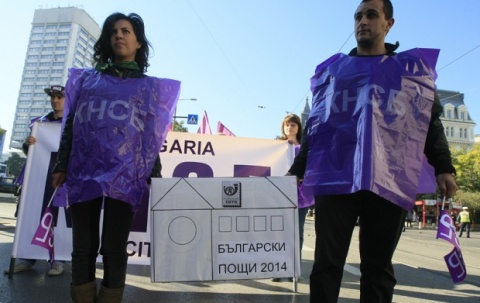 Employees of state-owned Bulgarian Posts EAD protest in front of the government building in downtown Sofia. Photo by BNGES

About 1000 employees of state-owned postal operator are staging a protest in front of the government building in downtown Sofia.

Employees from all over the country gathered outside the office of the Council of Ministers to demand an increase in salaries chanting "We want our money!"

"We are protesting in front of the government building, because we want our voices to be heard by those in power inside!", declared before the protesters Valentin Nikiforov, Vice president of the Confederation of Independent Syndicates in Bulgaria (KNSB).

The government must make all the necessary steps in order to improve the condition of the state-owned Bulgarian Posts EAD, announced Georgi Bochev, Chair of the Communications unit of KNSB.

The cabinet should transfer BGN 2 M due compensation for 2011 to the employees of the operator, added Bochev.

Bulgarian Posts EAD is in dire financial condition and the government is considering various options to stabilize the operator.

Transport Minister Danail Papazov announced on September 3 that a strategic partner would be found for Bulgarian Posts EAD by the end of the month which would acquire 49% of the company in order to guarantee efficient and professional management.

The cabinet's attempt to find a strategic investor is actually an attempt at covert privatization, according to Penka Krasteva, Deputy Chair of the Communications unit of the Confederation of Independent Syndicates in Bulgaria (KNSB).

She emphasizes that employees of Bulgarian Posts EAD do not want the company closed but would like to see a stabilization program implemented so that the postal operator can keep functioning.