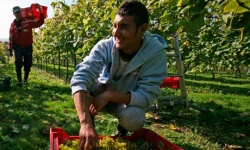 Britain needs east European immigrants because its own citizens are not willing to work hard enough or won't come off benefits to do seasonal fruit picking jobs, a submission from the Bulgarian government to the Home Office claims.

In the document, seen by the Observer, Bulgaria insists there is no evidence that its citizens are involved in "benefit tourism". It says that Britain gains from the free movement of people and that Bulgarians in the UK are "predominantly young, single, relatively well educated".

It cites a recent report from the Migration Advisory committee of the Home Office assessing the benefits of Romanian and Bulgarian seasonal workers to the economy. Bulgaria's submission says: "Operators and growers are trying unsuccessfully to recruit (and retain) British workers, who are reluctant to live on (be tied to) the farm; either cannot or will not work at the intensity required to earn the agricultural minimum wage and have little incentive to come off social security benefits for seasonal work.

"Bulgarian and Romanian workers in the agricultural sector are presented in the report as highly valued, a stable and reliable source of labour." The 10-page Bulgarian document was submitted last month to the Home Office and the Department for Work and Pensions to form part of David Cameron's review of European Union powers. The arguments presented will also form the basis of the Bulgarian government's defence against attempts to limit its citizens' access to public services, such as the NHS, and jobs when the current transitional immigration arrangements are lifted in 2014.

A series of ministers and Tory MPs have called for tighter access to the welfare state before Romanian and Bulgarian citizens have total freedom to move and work in the UK. However, the Bulgarian government hits back in its submission. It claims that the current EU laws on freedom of movement and access to another member state's welfare system are "rarely abused and do not lead to overburdening of the public services of the latter.

"Particularly in the case of Bulgarian and Romanian citizens in the UK, there is no evidence of so-called 'benefit tourism'," it says.

In an attempt to prove that Bulgarians are not interested in coming to Britain to exploit the welfare state, the document points to Department for Work and Pensions data showing that in 2011, 16.6% of working-age Britons were claiming benefits as compared with 6.6% of working-age non-UK nationals.

The case presented in the document is in stark contrast to claims by Nigel Farage in his speech at Ukip's annual conference on Friday, during which he vowed to put Romanian and Bulgarian immigrants at the heart of his party's campaign in next year's European elections. He told activists that London was already experiencing a crime wave due to east European immigrants and that the country should not "unconditionally open our door to Bulgaria and Romania".

However, the Bulgarian government's submission suggests that its police would happily carry out joint patrols in the UK, as they do elsewhere, if there was evidence of its citizens being involved in crime. "The establishment of joint patrol teams with local police and representatives of the Bulgarian police authorities has given positive results in the prevention and detection of frauds and, in some cases, of crimes," it says.

Bulgaria also strongly denies claims that its citizens are exploiting Britain's generosity. "There is no evidence that the UK suffers significantly from benefit tourism. EU migrants do not represent a disproportionate number of benefit claimants – rather the reverse," it adds.

The leaking of the submission by sources in the Bulgarian foreign ministry comes as a new report from the recruitment company Harvey Nash and the Centre for Economics and Business Research shows that curbing EU immigration could cost the UK ?60bn in lost GDP by 2050 and drive up national debt.

Government borrowing would be 0.5% higher without migration to offset the ageing population in the UK, it is claimed.