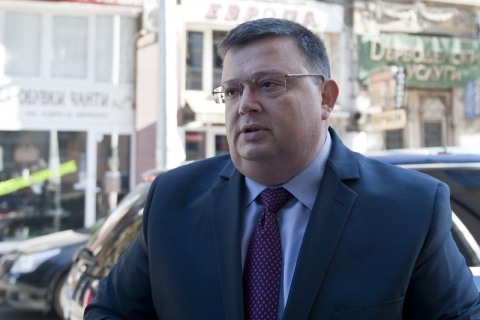 Bulgarian Chief Prosecutor Sotir Tsatsrov has said that an inspection has uncovered a total of 875 telephone numbers contained in the notebooks of officials of the Specialized Operative and Technical Operations Directorate of the Interior for which no wiretapping permits had been issued.

Speaking Thursday before the sitting of the Supreme Judicial Council (VSS), he commented on the ongoing investigation against former Interior Minister Tsvetan Tsvetanov in the unauthorized wiretapping case.

"Finally, all work notebooks of all operators of mobile stations at the Specialized Operative and Technical Operations Directorate of the Interior have been examined, which is huge work. It also takes enormous efforts to establish the names of the subscribers whose phones were wiretapped without permits, on which the authorities are currently working. We now expect to learn the names of these 875 people whose phone numbers are contained in the notebooks despite the lack of wiretapping permits," Tsatsarov stated.

He admitted that a colleague of his, a prosecutor, had found his number among the 875 entries.

Tsatsarov assured that the investigation into the unauthorized wiretapping case proceeded at full pace, adding that the prosecuting authority was doing everything possible to replace expert witness Evgenii Nikolov, who died in a car crash.

The so-called Bulgarian Watergate scandal unfurled at the end of March when Sergei Stanishev, leader of the Bulgarian Socialist Party (BSP), submitted a tip-off to Tsatsarov about alleged illegal wiretapping of politicians, businesspeople and magistrates which had taken place during the term in office of the GERB government of Prime Minister Boyko Borisov.

In end-March, a team of 12 prosecutors headed by Sofia City Prosecutor Nikolay Kokinov and his deputy Roman Vasilev started a probe on the tip-off.

Shortly after that, charges were pressed against four former and current senior officials of the Specialized Operative and Technical Operations Directorate of the Interior.