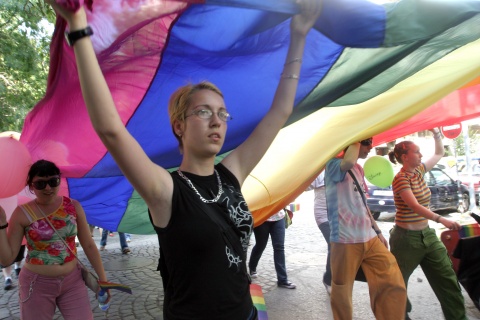 A file photo shows an activist touching a rainbow flag during the first Sofia Pride parade in Sofia, which took place on 28 June, 2008. Photo by Sofia Photo Agency

Bulgaria fails to tackle homophobic and hate crime due to lack of adequate legislation and data collection, according to a report by Amnesty International.

The report highlights gaps in Bulgaria's current legislation where sexual orientation and gender identity are not explicitly included as grounds on which hate crimes can be perpetrated.

Currently hate crimes and homophobia trial verdicts are based on the existing anti-hooliganism legislation and justice is not always served on perpetrators.

The report named „ Because of who I am. Homophobia, Transphobia and Hate crimes in Europe“ includes the story of the murder of Mihail Stoyanov, a medical student who was killed in Sofia in September 30, 2008, because he was perceived as gay.

Almost five years later the trial has not yet started.

The failure to bring justice to the murderers of Mihail has devastated his mother, Hristina Stoyanova, quoted in the report saying:

“What drives me to seek justice is that no more cases like this should happen. It is not only my case. My case got publicity but there are similar cases that no one is talking about“.

Bulgarian prosecutors have commented that offenses committed with homophobic and transphobic motives were not defined in Bulgarian law as constituting hate crimes, so they could not be prosecuted or punished as such.

A draft proposal for a new revised penal code under which homophobic motives will be defined as constituting hate crimes was introduced back in May by a group formed by the Bulgarian government.

It turned out however that while sexual orientation featured as a ground on which hate crime can be perpetrated, gender identity did not.