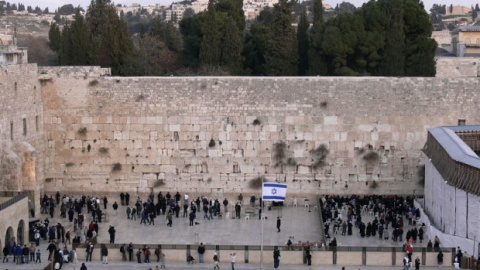 A symbolic replica of the "Wailing Wall" - the Western Wall of the Temple in Jerusalem (pictured the real one) – has been mounted in the Bulgarian capital, photo by BGNES

The first Jewish culture festival in Bulgaria started Sunday in front of the National Palace of Culture in the capital of Sofia.

The launch was marked by the appeal "Shalom" which is the name of the organization of Bulgarian Jews and also means "Hi."

There are several occasions for organizing the fest - the 70th anniversary since the rescue of Bulgarian Jews from the Nazi Holocaust death camps in World War II, the start of the holiest day of the Jewish year, Yom Kippur or the Day of Atonement, and the Day of Sofia.

The event is part of the campaign "Sofia – European Capital of Culture 2019."

It is organized by Shalom, JDC Bulgaria and Sofia City Hall.

A symbolic replica of the "Wailing Wall" - the Western Wall of the Temple in Jerusalem – has been mounted in the park of the National Palace of Culture.

Everyone can leave a message on the Wall while the organizers will take all of them to the real one in Jerusalem to make sure all wishes will become reality.

Also on Sunday, young volunteers from the Bulgarian Jewish community offer free tours for Sofia residents and visitors to locations in the city related to Jewish history and culture. There is a workshop to make, bake and take home Challah – the ritual Jewish bread.

Games and surprises are organized for the children along with open air concerts, including performances of leading Bulgarian-Jewish musicians such as Lika Eshkenazi and Etien Levy and the young talent Rene Ranev and his rock band.

The culmination of the performances will be in the evening when the special guest from Israel Amir Gvirtzman, who plays more than 33 wind instruments and the "missionaries of Jewish music," Amsterdam Klezmer Band, will walk on stage.

There are stands with Jewish literature and a photo studio where people can have their pictures taken disguised like Einstein.

Israeli Ambassador in Sofia Shaul Kamisa-Raz said he was acclaiming the event and offered full support. He also voiced hope the fest will become an annual tradition as such celebrations were important all over the world, for all countries and cultures.