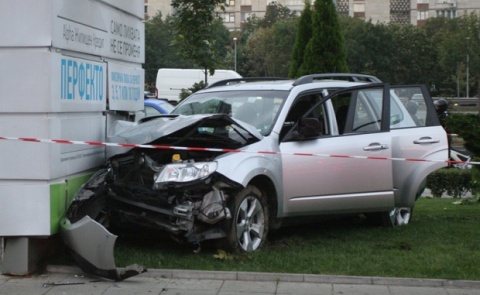 A SUV rammed into the parking lot of the Sofia shopping center "The Mall" Friday evening injuring three people and the driver. Photo by BGNES

The condition of the most seriously injured person in the Friday evening traffic incident on "Tsarigradsko Shosse" in the Bulgarian capital Sofia remains critical.

The information was reported by bTV, citing doctors from the hospital where the young man is listed. The 24-year-old pedestrian has suffered broken skull and brain hemorrhage. His life remains in danger after undergoing skull surgery overnight. He is currently in intensive care and on respiratory apparatus.

The 20-year-old woman, who was also listed in the hospital, is in good condition. She has suffered bruises on the head and is expected to be released in the next few days.

The third injured pedestrian and the driver of the SUV, which rammed into the parking lot of the shopping center "The Mall" are still listed in the emergency "Pirogov" hospital in Sofia.

The hellish accident occurred around 5:30 pm Friday. The diver, a 76-year-old Ukrainian citizen, apparently lost control of the SUV and smashed into the three pedestrians. He tested negative for alcohol. The weather, which was very rainy and windy, could have been a contributing factor.

An investigation into the case has been launched.

The area around the popular shopping center has gained tragic reputation after a deadly taxi cab crash at the bus stop in front of "The Mall" earlier this year. 12 people were injured and 2 died – a 25-year-old woman and 6-year-old child.