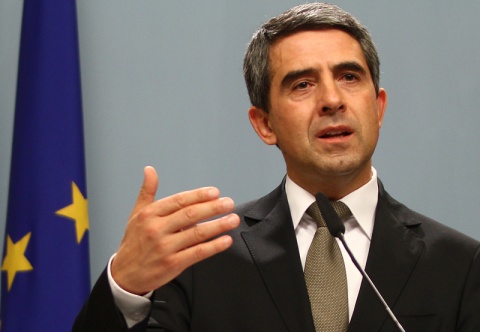 Bulgarian President Rosen Plevneliev and his Estonian counterpart Toomas Ilves have agreed that the two countries have common stances and interests on the EU Cohesion Policy, the measures aimed at encouraging innovation, and energy diversification and market liberalization in line with the requirements of EU's Third Energy Package.

The issues were discussed during talks between Plevneliev and Ilves on during the first day of Plevneliev's official visit to Tallinn, according to a media statement of the Bulgarian President's Office.

"We have common ideas and views on long-term planning in the EU by 2020. Both countries believe in the necessity of special programs for the less-developed European regions and rely on the support of the EU Cohesion Policy for developing infrastructure," Bulgaria's head of state noted in a Thursday media statement.

The emphasis of Plevneliev's visit to Tallinn is on the experience of the Baltic country in the sphere of offering e-services to citizens and businesses.

Ilves attributed Estonia's widely-recognized success in e-government to the political will for the achievement of this priority goal, adding that the state bodies in charge of the policy had been clearly designated.

The two heads of state agreed that Estonia would assist Bulgaria with the introduction of e-services for citizens.

"If Bulgaria manages to secure EU funding for the introduction of e-government in Bulgaria in the period 2014-2020, we will be able to accomplish miracles in a year and a half in cooperation with our Estonian friends," Plevneliev stated after the meeting.

"We need a brave decision – if we introduce e-government in two years, Bulgaria will be an entirely different country," he emphasized.

The two heads of state underscored the importance of the upcoming Eastern Partnership Summit in Vilnius in November and were explicit in expressing support for the signing of an Association Agreement with Ukraine.

Plevneliev and Ilves also discussed the issue of EU expansion through the accession of Western Balkan countries.

Plevneliev reiterated Bulgaria's support for the EU integration of Serbia and the other Western Balkan countries, stressing that the Balkans needed a new positive example after Croatia's entry into the EU.

Plevneliev and Andrus Ansip, Estonia's Prime Minister, agreed that there was much untapped potential as regards trade turnover between the two countries despite the increase registered over the past few years.

Plevneliev and Ansip exchanged views on the project for connecting the Baltic and Black Sea ports through a railway line by using EU cohesion funding.

They also discussed opportunities for boosting bilateral tourism and the launch of direct flights between the two countries, especially during the summer season.