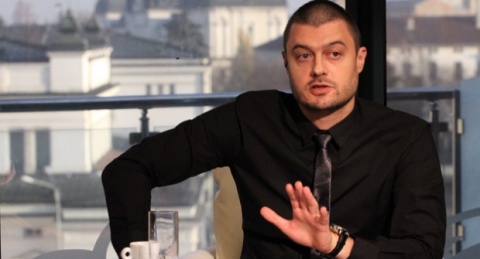 Controversial Bulgarian TV7 director and host Nikolay Barekov is officially entering politics Wednesday with the launch of his campaign.

Since Tuesday, he is no longer CEO of TV7, NEWS7 and SUPER7. He says jokingly he had fired himself from the posts, but is serious he had done it in order to seek new challenges and new ways to serve Bulgaria and Bulgarians.

Robeva will attend the Wednesday press briefing where the two are expected to present details about their common political plans and the goals of the movement.

Despite the fact the journalist in no longer heading TV7, its news channels will air live the press conference.

Barekov is also expected to announce who will succeed him at the post of CEO of TV7.

On reflection day – the day before the elections, when political propaganda is banned, Nikolay Barekov was the one to break the story about 350 000 illegal ballots discovered inside a printing house, suspected to be used to manipulate the May 12 early vote.

Barekov claimed then the ballots were to be used by the formerly-ruling Citizens for European Development of Bulgaria party, GERB, to twist the vote results as the printing house in the town of Kostinbrod, near Sofia, was owned by a GERB municipal councilor.

Back in February, the journalist, who during the entire GERB term was criticized, and even ridiculed, for blindly supporting its government ministers and its leader, former Prime Minister, Boyko Borisov, suddenly turned into their archenemy after Borisov announced he was resigning.

The resignation came in the aftermath of mass protest rallies against poverty, stagnation, and corruption. From strong supporter of the former PM and of GERB, TV7 turned virulently critical to them.

TV7 is also linked to controversial businessman and MP Delyan Peevski, whose election in June as the new head of Bulgaria's State Agency for National Security (DANS), stirred widespread outrage and protest rallies.