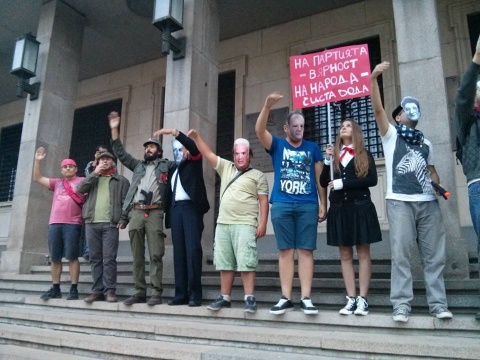 A group of antigovernment protesters stood Monday evening on the steps of the Central Bank's building in Sofia with masques of politicians and greeted the parade as it was customary during the Communist regime. Photo Konstantin Pavlov, Facebook

The occasion was the emblematic date of September 9, considered both the date of Bulgaria's anti-fascist uprising in 1944, and the beginning of the Communist regime.

The participants wore red and blue scarfs as did the Bulgarian children under the Communism in sign of their belonging to youth Communist organizations. Many waved red flags and held banners mocking the Communist-style such as ""Glory to the Bulgarian Socialist Party," "BSP-Movement for Rights and Freedoms - Eternal Friendship," and "Oligarchs from All Countries, Unite," among others.

The rally started at 6:30 pm and the gathering point was the area adjacent to the headquarters of the Central Bank, BNB, in downtown Sofia. This is the same area where the Communist parades were held on September 9, which was Bulgaria's national holiday until 1989.

At the time, the State dignitaries stood on the balcony of the adjacent Mausoleum of Communist leader, Georgi Dimitrov, which was demolished after the fall of the regime in 1989.

After gathering there, the demonstrators staged a brief march, while a group of them stood on the steps of the bank's building with masques of politicians and greeted the parade as it was customary during the regime.

The protesters later moved to Independence square in front of the Council of Ministers building and later marched on their usual route to the building of the Parliament.

Some of them continued to the Monument of the Soviet Army and blocked the Eagles' Bridge intersection for half hour.

The rally dispersed around 9 pm; no incidents have been reported.

The rally was held for an 88th day in a row in the record-long protest in the country.

Anti-government rallies in Sofia have subsided in numbers, but participants remain relentless in their struggle to "topple" the government of Prime Minister, Plamen Oresharski.

The rallies, at times reaching 20 000 and even 30-40 000 in Sofia, were triggered by the appointment of notorious media mogul and lawmaker Delyan Peevski as Head of the State Agency for National Security (DANS) back on June 14.

The protesters were not appeased by the subsequent cancellation of the decision and went on to demand the resignation of the cabinet over ties with oligarchs and a number of controversial appointments.