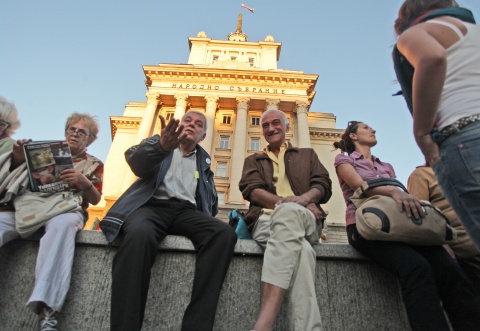 They may have reduced sharply, but protests in the Bulgarian capital Sofia have been going on for more than 80 days, as demonstrators push to keep up the pressure on their government. Photo by Sofia Photo Agency

As the new political season kicked off in Bulgaria amid relentless rallies against the Socialist-led government, analysts have forecast tumultuous times ahead.

The series of rallies was triggered by the appointment of notorious media mogul Delyan Peevski as Chair of the State Agency for National Security (DANS) back on June 14 and the standoff between the protesters and the Socialist-backed government is showing no signs of ending anytime soon.

It is “mission impossible” for the current parliament to gain any credit of public trust, but at the same time it is highly unlikely that the government will step down, according to Yuriy Aslanov.
He predicts that there will be no early elections and expects that the scheduled elections for the European Parliament on May, 2014 will show the balance of the forces.

Mr. Aslanov states that at the moment none of the existing political parties is prepared to attack the existing status quo.

Commenting the potential impact of the Syrian crisis on the Socialist-led cabinet' policy, Mr. Aslanov says:

"If Bulgaria willingly participates in war action in Syria, then the government will lose a lot of its support, not only among the general public, but also among its own dedicated supporters“.

Also, the newly emerged political projects are not ready at the moment to confront the status quo, because they need more time to make themselves recognizable to the voters and their leaders to become popular.

A debate on the expected new election code should be top priority for the parliament, according to Ivan Nachev.

Mira Radeva expects that the results of next year's European Parliament elections will show if there is a will to change the current situation.

“We will see if the ruling Bulgarian Socialist Party, its ethnic Turkish ally the Movement for Rights and Freedoms and the nationalist Ataka party will see their electoral support decreasing because of their current participation in the government, or on the contrary – they will turn out to be stable.“

The newly formed Bulgarian right-wing informal coalition - „The Reformist Block“ (founded by DSB, Bulgaria for Citizens, the Greens party, the Freedom and Dignity People's Party and the Blue Unity formation) has the potential to succeed as an alternative to the status quo and bring about the much needed political change, Mira Radeva believes.

For this to happen, however, the block should assert itself as a „a coalition of voters, not just a coalition of parties and their leaders“.

The formerly ruling center-right party GERB (Citizens for European Development of Bulgaria, the only right party represented in the current parliament) had no choice but to come back to parliament, according to Mira Radeva.

The party of former Prime Minister Boyko Borisov has to face reality – it has its own responsibilities as the only opposition party, she said.