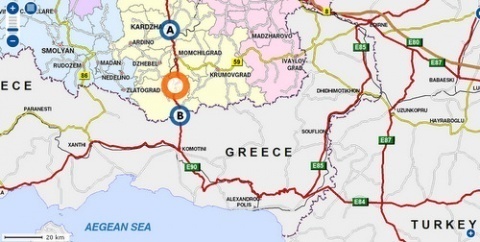 The road between Kardzhali (A) and Podkova (marked in orange) completed the Kardzhali-Makaza Pass (B) road, from the Danube-Aegean corridor through Bulgarian territory. Map from bgmaps

The new Makaza border crossing point on the Bulgarian-Greek border is going to be officially opened on Monday, September 9.

On September 3, Greece sent an official note to Bulgaria's Foreign Ministry to confirm to opening date.

The ribbon-cutting ceremony starts at 11 am and will be attended by the district governors of Kardzhali and East Macedonia and Thrace.