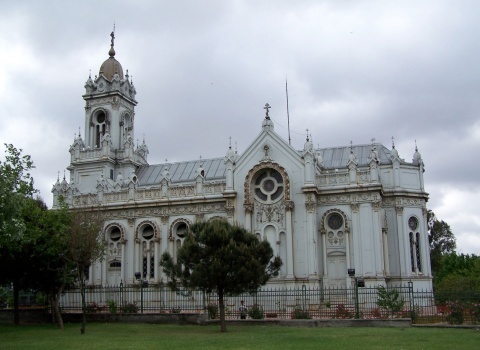 The Bulgarian "Saint Stephen" Church, also known as the Bulgarian Iron Church, is a Bulgarian Orthodox church in Istanbul, Turkey, famous for being made of cast iron. Photo by wikipedia

The famous Bulgarian Church "St. Stefan" in Istanbul, known as the "Mother Church" and the "Iron Church" celebrates Sunday 115 years of its dedication.

The anniversary coincides with the celebration of the Nativity of Mary.

The "Bulgarian Orthodox Church" St. Stefan "in Istanbul" Foundation informs the anniversary will be marked with a Holy Liturgy for the Nativity of Mary in the church "St. Ivan Rilski" of the Bulgarian Exarchate in Istanbul.

With the blessing of His Holiness, the Bulgarian Patriarch Neofit, and of the Holy Synod of the Bulgarian Orthodox Church, the liturgy will be led by Deacon Angel Velkov.

There are a number of expected guests from Bulgaria and the Christian Orthodox community in Istanbul.

The Bulgarian "Saint Stephen" Church, also known as the Bulgarian Iron Church, is a Bulgarian Orthodox church in Istanbul, Turkey, famous for being made of cast iron. The parts were manufactured in Vienna and then transported via the Danube River to Bulgaria and through the Black Sea to Istanbul.

The Church was inaugurated in 1898 by Exarch Joseph and marks the beginning of the Bulgarian exarchate.

According to a legend, Sultan Abdul Azis, was not inclined to let Bulgarians have their own church, but yielded to the pressure under one condition – for the church to be built only in a month. Bulgarians found the solution by making the church from cast iron.

In recent years, the Bulgarian State and the Istanbul City Hall have made significant efforts to raise funds for the church's renovation and maintenance, but those funds are still insufficient.

In 2010, the dome of the church was gold-plated thanks to a donation of Bulgarians from Plovdiv. Bulgarians living in Istanbul now say the church is the only one in the city having a gold-covered dome.

In 2007, St. Stephen was declared the most beautiful church in Turkey. Architects call it a unique building. It is also the only cast-iron church in the world.

Right before Christmas 2010, the Istanbul City Hall announced it will use municipal funds to repair the temple.