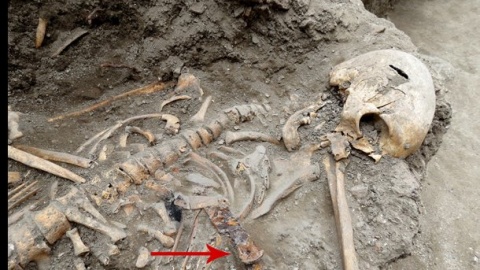 A second skeleton of a medieval "vampire" has been discovered on Bulgaria's Black Sea coast.

Archaeologists have found the skeleton of an elderly male with a knife in his heart during excavation at the "Saints Archangels Mihail and Gavrail" church in the historical coastal town of Nessebar.

Some experts say the stabbing could simply have been some criminal case, but others, including archaeologist Todor Mavrakov, are firm the knife is sound evidence the man has been deemed a vampire. The skeleton dates from the 17th century.

A total of 28 tombs have been found in an area of 40 square meters inside the church, dating from the 13th-14th and from the 16th-17th centuries. One of them is of a child, buried in a coffin covered with whitening.

Marvakov says this has been done in times of plague.

The first "vampire" skeleton in Bulgaria was discovered in 2012 in the historical coastal town of Sozopol.

It is one of a man with an iron stick in his chest. He was buried over 700 years ago and was stabbed multiple times in the chest and the stomach, as his contemporaries feared that he would rise from the dead as a vampire.

Over 100 buried people whose corpses were stabbed to prevent them from becoming vampires have been discovered across Bulgaria over the years, according to Bulgarian National History Museum director Bozhidar Dimitrov.

The "vampire" skeleton was included in the National Geographic ranking of the 10 most popular news pictures for 2012. According to the editors, it shows that the fear of vampires is much older than Bram Stoker's Dracula.