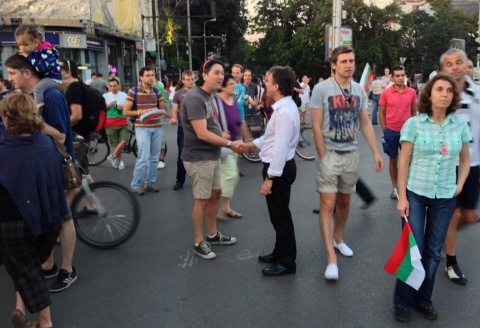 The Ambassador of France in Sofia, Philippe Autie, talks to protesting Bulgarians on Sofia's Eagles' Bridge back in July. Photo by Ivo Bozkov for OFFNews

The Order of Stara Planina is traditionally handed to foreign Ambassadors in Bulgaria whose terms in office have expired – but the government has now made an exception, local media inform.

In July, amidst mass and persisting anti-corruption protest rallies, Autie and German Ambassador Matthias Hoepfner issued a joint statement insisting the voice of the people to be heard and Bulgaria’s government to part with the oligarchic model of ruling the country.

The French Ambassador later personally visited one of the anti-government protests in Sofia.

Local media now believe the government’s decision not to decorate Autie with the highest state honor has been prompted by his support for the rallies.

The series of relentless and mass rallies, at times reaching 20 000 and even 30-40 000 in Sofia, was triggered by the appointment of shady media mogul and lawmaker Delyan Peevski as Head of the State Agency for National Security (DANS) back on June 14.

The protesters were not appeased by the subsequent cancellation of the decision and went on to demand the resignation of the government over ties with oligarchs and a number of other controversial appointments.