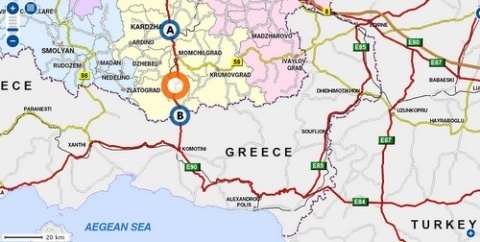 The road between Kardzhali (A) and Podkova (marked in orange) completed the Kardzhali-Makaza Pass (B) road, from the Danube-Aegean corridor through Bulgarian territory. Map from bgmaps

Bulgaria and Greece have agreed to open the new Makaza border crossing point on the Bulgarian-Greek border for vehicles weighting less than 3.5 metric tons.

The Regional Governor of Kardzhali, Biser Nikolov, told Darik radio Saturday he expected that the checkpoint will be operational by September 9, saying the date has been proposed by negotiators for the Greek side.

"The road through Makaza is a decades-long dream for people in the region. I am convinced it will boost tourist trips between Bulgaria and Greece and the development of border regions in both countries, and will significantly alleviate traffic at the other border crossing points on the Bulgarian-Greek border, said Nikolov.

However, it seems that Greece had prevailed in the dispute in the long-delayed agreement to open the pass as Athens insisted that it is open only for cars and buses, while Sofia demands that heavy long vehicles, up to 5 tons, are also allowed to pass through.

At a regular sitting on August 14, Bulgaria's government gave the green light to the launch of the border crossing point and also reviewed a draft agreement with Greece on providing joint control for it.