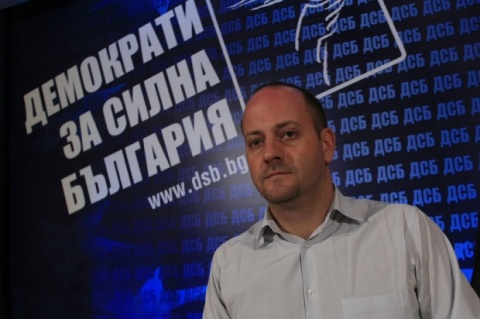 The leader of the right-wing Democrats for Strong Bulgaria Party, DSB, Radan Kanev, photo by BGNES

Bulgaria's Socialist-led government has appointed as new Chair of the State Agency Archives a person linked to the former Communist State Security, DS.

Ivan Komitski has been an agent of the DS's Unit 3 before the fall of the Communist Regime, the leader of the right-wing Democrats for Strong Bulgaria Party, DSB, Radan Kanev, and members of the party leadership, Atanas Atanasov and Albena Palpurina, announced Thursday.

DSB are convinced the current government, which is endorsed by the Bulgarian Socialist Party, BSP, has replaced top expert Martin Ivanov with Komitski only led by the desire to conceal the archives from the Communist era in Bulgaria.

According to Komitski's official CV, which was also sent to the media, he has worked for the Interior Ministry's Archives Office between 1988 and 2008 and has headed the Archives Office of the State Agency for National Security, DANS, in 2008-2009.

The bio, however, conveniently skips his record with DS and Unit 3 and the fact he had been a direct subordinate there of DS Gen Nanka Serkedzhieva who has been found guilty by a Court tribunal of destroying a huge amount of Communist regime documents.

"The dismissal of a great professional such as Martin Ivanov is alarming because he was the first director of the Agency who tried to make the archives public and those in power will use Komitski to conceal them," said Atanas Atanasov.

DSB have sent a written request to Prime Minister, Plamen Oresharski, asking him to tell them if he knew about Komistki's DS past when the decision for the appointment was made.

The right-wing party has further alerted of two other recent appointments of DS agents to senior posts.

Georgi Dimitrov, appointed as Permanent Secretary of the Foreign Ministry, has worked for DS under the aliases Anton and Boil and had been in charge then of spying on foreign diplomats, including UN representatives.

The other one is Boyan Chukov, who has been appointed Secretary of the Security Council at the Council of Ministries, and who has also been exposed as DS agent.

Atanasov stressed that all of the above have been trained by the Soviet Union secret services.