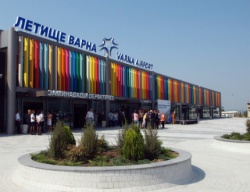 The new terminal at Varna airport takes over the operations of the older one, which was closed after 41 years of operation. Photo by BGNES

Ninety passengers on a commercial flight from Minsk arrived at the brand new terminal in Bulgaria’s coastal city of Varna Monday.

The event marked the start of operations of the new terminal facilities.

“The new terminal has capacity for 1,8 million passengers and a total area of 20 000 m2, which could be extended, if needed," said Dimitar Kostadinov, Director of Varna Airport.

Terminal 2 boasts to be one of the most modern airport facilities in Bulgaria and has the most contemporary service systems, providing shopping areas, cafes and eateries.

The new terminal takes over the operations of the older, Terminal 1, which was closed after 41 years of operation.