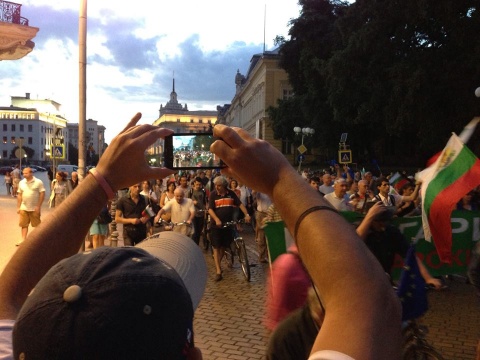 Bulgarian anti-government protesters have pledged to "meet accordingly" the lawmakers, who are returning from vacation next week. Photo by Ivo Bozhkov, OFFNews

About 300 Bulgarians have taken once again to the streets of the capital Sofia Wednesday evening to demand the resignation of the country's government.

The rally was held for a 76th day in a row in the record-long protest in the country.

As usual the protesters held banners and national flags and shouted "mafia," "elections" and "resignation."

Independence square and "Dondukov" boulevard were blocked for traffic. There was riot police presence. The demonstrators marched on their usual route to the building of the Parliament, which is no longer surrounded by metal fences, but it is still guarded by the police.

On their way they stopped by the headquarters of the State Agency Archives and shouted again "resignation" in sign of protest against the replacement of its Director - top expert Martin Ivanov – with Ivan Komitski, who has been in charge of police archives since 1988.

Protesters also remind that they are going to "meet accordingly" the lawmakers, who are returning from vacation next week. A huge rally is going to be staged on Wednesday, September 4, according to organizers. Smaller protests are to continue until then.

The series of relentless and mass rallies, at times reaching 20 000 and even 30-40 000 in Sofia, was triggered by the appointment of notorious media mogul and lawmaker Delyan Peevski as Head of the State Agency for National Security (DANS) back on June 14.

Anti-government rallies in Sofia may have subsided sharply, but protesters are bracing up for a showdown at the beginning of September. Thousands have pledged on Facebook to attend after the lawmakers come back from their summer break.