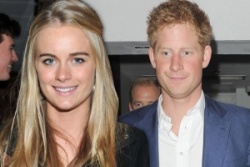 Prince Harry of Wales is reportedly planning to pop the question to his girlfriend of 18 months, model Cressida Bonas, according to reports citing royal family insiders.

Harry, 28, and Bonas, 24, have been dating since last year, however, Cosmpolitan and other publications inform their relationship has become very serious and they might be engaged soon.

Such rumors first emerged when the Prince took Cressida to a romantic African safari to the same spot where his brother Prince William had proposed to Kate Middleton in 2010.

The sources have said off-the-record Harry had shared on several occasions that Cressida is very special to him. British media claim the Kensington Palace is preparing an official announcement about the engagement, while the wedding will be in the spring of 2014.

Cressida, who recently graduated from a music and dance school, is said to shy away from the spotlight and from public attention. The couple is very cautious about having their pictures taken together in public.

Harry dated for seven years another young woman, Chelsy Davy, but they split in 2011. Tabloids speculated it was due to celebrity status and pressure that were too hard on Chelsy.

A Kensington Palace spokesperson has declined to offer any comments and details about an upcoming wedding on grounds this was a personal matter.