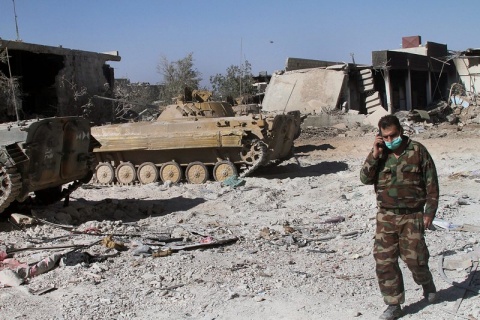 A Syrian soldier walks down a street in Damascus on Saturday, August 24. Photo by EPA/BGNES

Russia has warned that military intervention in Syria would have "catastrophic consequences" for the region.

Russian foreign ministry spokesman Alexander Lukashevich on Tuesday called on the international community to show "prudence" over the crisis and observe international law.

"Attempts to bypass the Security Council, once again to create artificial groundless excuses for a military intervention in the region are fraught with new suffering in Syria and catastrophic consequences for other countries of the Middle East and North Africa," he said in a statement.

Late on Monday, the US said it was postponing a meeting on Syria with Russian diplomats, citing "ongoing consultations" about alleged use of chemical weapons in Syria.