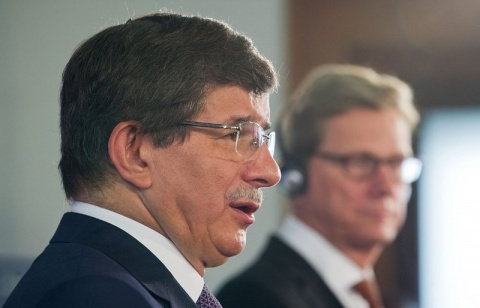 A total of thirty five nations, including Turkey, are considering joining the United States in taking action against Syria, Turkey’s foreign minister has announced.

More than 35 nations are considering joining the United States in taking action against Syria, and Turkey is among them, Ahmet Davutoglu told the Turkish Milliyet daily newspaper.

“We always prioritize acting together with the international community, with United Nations decisions. If such a decision doesn’t emerge from the UN Security Council, other alternatives .?.?. would come onto the agenda,” Davutoglu said.

Earlier on Monday UN inspectors reached one of the areas of an alleged chemical attack in Syria after sniper fire hit one of their vehicles.

The inspectors entered the town of Moadamiyet al-Sham and appeared to be inspecting the area with doctors, according to social media videos posted by activists.

The team had been on its way to inspect the scene of an alleged chemical weapons attack in the Damascus suburban area of Ghouta, after the Syrian government on Sunday agreed to grant the inspectors full access, the United Nations said.

The regime said its army would cease all hostilities as long as the U.N. inspectors are on the ground.

But sniper fire hit a vehicle used by a UN chemical weapons investigation team in Syria multiple times on Monday.

The team "returned safely back to the government checkpoint," a UN statement said.

The UN did not say who fired the shots, but the first car in the convoy was hit and the team returned to a checkpoint.

UN experts are visiting the sites of suspected chemical weapons attacks in which hundreds died last Wednesday in the Syrian capital Damascus.

The experts are expected to take soil, blood, urine and tissue samples for laboratory testing from five locations on Monday and Tuesday.