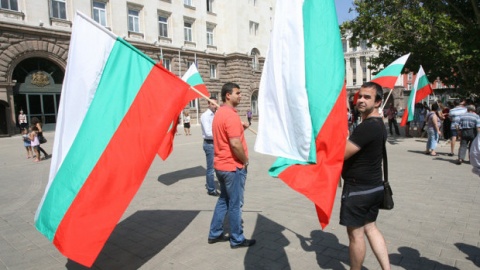 Supporters of the Bulgarian Socialist-led government gathered once again Monday on Independence Square, near the Office of the President and his Administration, shouting "Resignation," "Impeachment." Photo by BGNES

The statement was made before bTV by one of their representatives, Lenko Petkanin.

The demonstrators gathered once again Monday on Independence Square, near the Office of the President and his Administration, shouting "Resignation," "Impeachment," and "Go Away!"

They are outraged by what they deem verbal support on Plevneliev's part for those who want the resignation of the Cabinet of Prime Minister, Plamen Oresharski.

Petkanin further stated he harbored strong doubts the President will change his behavior as he has had scores of opportunities to do so until now.

"I have not seen anything from him, beyond tarnishing Bulgaria and the presidential institution, so, the only solution is to have him step back and be replaced by a dignified person to represent Bulgaria and its citizens," said the government's supporter.

Another protester asked Plevneliev to come outside and talk to the people who are rallying every day under his windows and to organize a round table to work on a new public contract.

Bulgaria's ruling Socialist-led coalition was, however, exposed recently in organizing dozens of chartered buses carrying people from all over the country to Sofia.

Over 40 chartered buses arrived in the capital early on August 16, carrying 4000 to 5000 government supporters. The move resulted in tensions, as anti-government protesters from Sofia also gathered in the city's center to rally against a controversial budget revision.