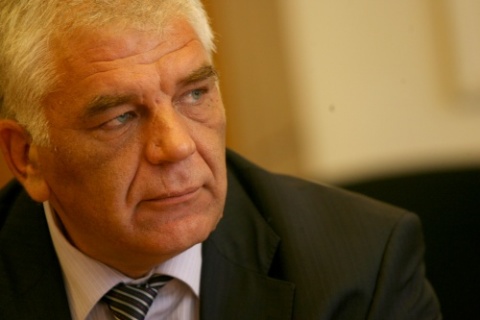 On Wednesday, August 21, Vanyo Tanov, was dismissed by the Socialist-endorsed government from the post of Customs Agency Director. Photo by BGNES

Nikolay Popov, who has been stripped of his right to access classified information over suspected ties with drug dealers, is going to be the acting Director of the Bulgarian Customs Agency.

The site OFFNews writes Monday that Popov is replacing Borislav Borisov, who is now on paid leave.

According to the publication, Borisov has been appointed at the post since last Wednesday, but the Finance Ministry is purposely concealing the information because those in power have another favorite for the position.

The Ministry, reportedly, committed a blunder by appointing Borisov not as acting head of the Customs, but as a permanent one. They keep it secret from the media because Borisov will be soon terminated.

On Wednesday, August 21, Vanyo Tanov, was dismissed from the same post, after being released from the hospital where he underwent treatment for two months.

According to OFFNews, the rush to sack Tanov led to the blunder and the complication since the law does not provide having an acting Customs chief and Borisov had to be made permanent even though he is not the rulers' favorite.

The article informs that "puppet masters" want to have at the post Kiril Zhelev, a former Deputy Finance Minister at the time current Prime Minister, Plamen Oresharski, was leading the Finance Ministry (the term of the Three-Way Coalition – 2005 -2009).

Popov, as acting Customs Chief, will propose Pavel Manchenko to be appointed as his Deputy since the post is vacant after Borislav Borisov's brief promotion.

Manchenko, on his part, became notorious through the "Tapegate" scandal that shook the government of the Citizens for European Development of Bulgaria party, GERB, in January 2011. The Bulgarian weekly Galeria published then a series of scandalous recordings, involving GERB leader and at the time Prime Minister, Boyko Borisov, and Tanov.

In one of the tapes, Tanov, on Borisov's order, is heard making a call to the head of the Sofia airport Customs Pavel Manchenko, instructing him to make sure that Nikolay Vuchev, a friend of the PM with whom he often plays football, is brought back to work at the airport's Terminal 2.

Nikolay Popov has been stripped from classified information clearance in 2009 at the time he was the Chief of the Sofia Regional Directorate for Fighting Organized Crime (RZBOP), known as the anti-mafia police, after an internal affairs investigation led to suspicions he was in touch with people from the underworld.

Popov appealed the decision before the State Commission for Information Security, but its probe proved there was enough reasonable doubt to deny him access to classified information.

The job description for the post of Customs Head lists security clearance as one of the requirements for it.

Reinstating a right to access classified information to someone will be a precedent in Bulgaria.

As OFFNews points out, it remains unclear why someone without security clearance has been even appointed as Customs Deputy Director since the post calls for frequent communications with OLAF and partner services, who are banned from sharing information with people whithout such clearence.