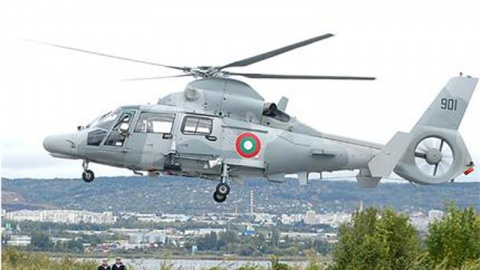 The Expendables 3 are using a Bulgarian Navy helicopter for scenes from the Hollywood hit motion picture sequel, file photo

Bulgarian Navy has rented one of its new transport helicopters "Panther" to be used in the filming of the Hollywood super production the "Expendables 3."

The news was reported Monday by the Bulgarian Trud (Labor) daily.

A contract has been inked on August 16 between New Boyana Ex 3 and the Command of the Bulgarian Navy for the participation of one helicopter and its crew in the shooting of the hit action movie.

New Boyana Ex 3 is to pay over BGN 9 900 for 1 flight hour. The amount has been determined through cost analysis. The payment will be submitted after the "Panther" ends its participation in the filming. The needed number of flight hours remains undetermined.

The company will also pay airport fees to the airport in the Black Sea city of Varna and the insurance for the chopper and the crew.

The "Panther" is housed in the Varna Navy base.

Until Sunday evening, the shooting of the hit Hollywood action movie took place inside the old shipyard in Varna, which represented scenes from Somalia.

Sylvester Stallone, Harrison Ford, Terry Crews, Dolph Lundgren, Wesley Snipes, and Jason Statham are already in Bulgaria, with Ford arriving only two days ago. The other are expected to arrive soon.

The movie is being shot Monday in the Boyana Film Studios near the capital Sofia.